Blooming outside and in 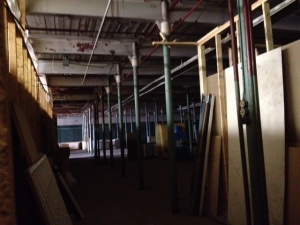 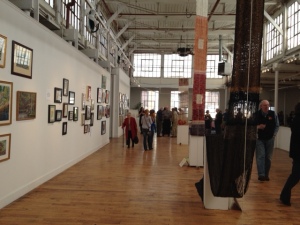 It is the first week of May and the trees are just coming into bloom.  It has been a long winter in Worcester and while there have been a few warm days it’s still cool enough for kids to wear jackets and hats and for the heat to kick on at night.

Yesterday I visited an art opening at the Sprinkler Factory which is exactly what it sounds like – an old sprinkler factory.  Worcester is full of old factories in various states of use and disrepair.  This picture to the left shows part of the bottom floor of the sprinkler factory where there is continued construction of studio spaces.  This stands in stark contrast to the finished gallery space on the second floor (next photo) which is fully of light and wonderfully incorporates the old factory feel with a completely new use.  As I drive through the city and see boarded up buildings I wonder what could bloom when spring comes to some of these spaces?  I know that some will be torn down and disappear but hope that many will be reborn.

Another example of this renewal is the Printer’s Building (here and here).
I think about the city as a whole and the identity that has been lost and not regained.  Some of the pieces that I see of who Worcester is and will be is:
-a blue collar ethic of hard work, humility, skill, and the dignity of labor
-a small town in a big city where you see people you know and stick around or come back to raise their families
-an increasingly diverse city that hasn’t congealed but might and hopefully will
-a three shift town where healthcare, industry, and service personal work at all hours
-a gateway to Boston and the rest of New England that bridges the gap between New England’s one “global city” and the res

This entry was posted on Tuesday, May 6th, 2014 at 2:30 pm and posted in Learning. You can follow any responses to this entry through the RSS 2.0 feed.
« What will church be like?
From the bottom up… »